In order to control the brightness of the LED, we’ll use the Pulse-width modulation (PWM), or pulse-duration modulation (PDM) :

To do this, we’ll use the following function : analogWrite(pin, value)

We’ll add a light sensor as wired below :

Just place the sensor in front of the LED:

In order to regulate, we’ll use a proportional–integral–derivative controller. A PID controller is a control loop feedback mechanism (controller) commonly used in industrial control systems. A PID controller continuously calculates an error value as the difference between a desired setpoint and a measured process variable. The controller attempts to minimize the error over time by adjustment of a control variable.

Here is the code :

The Arduino 1.6.6 comes with a tool called “Serial plotter”, that might be useful to graph our data:

The measured value is note stable, probably due to the PWM. A solution would be to smooth the results by doing an average on the lasts results, in order to filter the high frequency changes.

Note : You can graph several values at the same time, you just need to send them on the same line, with a space as a delimiter.

When I disrupt the system with an external light, we clearly see that the system tries to keep the brightness at the setpoint (100) by managing the led control value :

To conclude, here is how the system is handling a change from 0 to setpoint, or from setpoint to 0 : 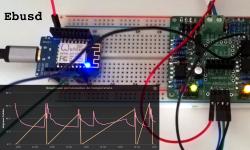 Boiler integration in Domoticz with Ebusd 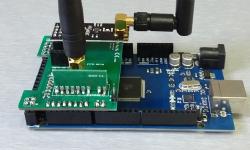 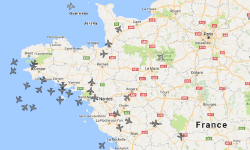